Edmonton as "The City of Champions"

In 1987, in the aftermath of the Black Friday incident where a tornado tore through Edmonton, then mayor Laurence Decor gave the city the moniker of “City of Champions” in response to the outstanding effort the cities citizens showed in coping with this disaster.[1] Coincidentally at the time the cities sports teams, most notably the Edmonton Oilers, were in the midst of an incredibly successful run of numerous championship seasons. Over the years, this slogan has become associated with the success of these sports franchises, overshadowing the original meaning of the slogan. Unfortunately, in recent times, the Oilers have become rather terrible and the slogan has become a sort of irony as the team has failed to procure any further championships. With this turn of events, Edmontonians themselves have begun to re-appropriate the slogan to describe themselves and the attitudes they expect of those from Edmonton. 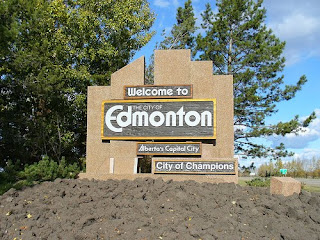 In recent years the slogan of Edmonton (“The City of Champions”) has come under fire as many residents no longer feel the slogan is appropriate. A main factor in this belief is the recent string of unsuccessful seasons by the Edmonton Oilers[15].

The idea that the slogan has become stale however is also found in another Edmonton Journal article by Elizabeth Withey, which also linked onto Connect 2 Edmonton. This article is a satire that pokes fun at the name and offers up fake suggestions for a new slogan, including “blame it on the gangs”, “we have gophers in our zoo”, and “bring a scarf”.[16] While clearly an ironic look at big boastful city slogans the article does point out that indeed the name has become old fashioned and a source of embarrassment to some in Edmonton. It is interesting to read the comments in the article as there is a mix of positive and negative comments, with poster Smudge pointing out that the name does in fact refer to the people of Edmonton as champions and poster Dj59 stating that the name “still resonates with me - I just wish the general media masses…. would get off the sports thing”.[17] In the opposite corner poster LG notes “the truth hurts for some people” while stating that Edmonton makes a big deal out of minor events.[18] Even the posters that defended the name choose to distance themselves from the sports team association and preferred to take the name back to its original intention, that of the people of Edmonton.

An example of the slogan returning to its previous people based roots is in an Edmonton Public Libraries blog, where a gay man recounts the fight to get an Edmonton gay pride week established. To him, Edmonton becomes the City of Champions because of the determination and will to get things done, while providing for all members of the city.[19] The fact that Edmontonians fought to get a gay pride parade organized despite opposition from all sides, including then mayor Bill Smith, created a sense of civic pride in this man who was not even from Edmonton, to truly declare that Edmonton deserved its maligned moniker.[20] A similar piece can be found in a January article from the Edmonton Examiner written by Scott Haskins. He notes that sports and West Edmonton Mall were the defining aspects of the city to outsiders and how those City of Champions signs brought a lot of pride to residents.[21] He then notes that these teams are “pitiful” and a “blight” now, so in their absence the city residents have stepped forward to take up the mantle, through generous donations to food banks, giving presents to needy children, to coming to the aid of thirty nine people who lost their homes at Christmas to a fire.[22] These two articles reveal a re-appropriation of the term from the teams that once took it over to the everyday people of Edmonton. Whether it is through a message board, blog or small newspaper article the rise of the internet has created a new avenue for people who wish to avoid the association with the local sports teams to still wield the phrase City of Champions. 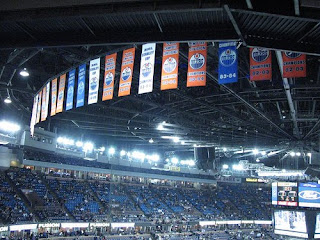 Although the rafters in Rexall Place are filled with championship banners, only 1 of them was achieved in the last 20 years[23].